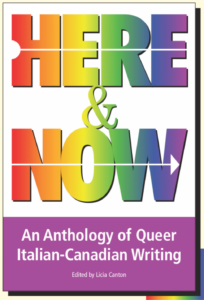 One of the Elia Chair's funded projects for 2020-2021 was a literary anthology called Here & Now: An Anthology of Queer Italian-Canadian Writing. The project is a key component of the Queer and Italian-Canadian project, which acknowledges and celebrates Canadians of Italian origin who are members of the LGBTQ+ community.

The project began with the documentary film Creative Spaces: Queer and Italian Canadian (2021), and out of a desire to find other ways to bring additional voices together, it assembled the most comprehensive volume of writing by queer Italian-Canadians. The volume features nonfiction, poetry, scripts, fiction, a graphic story and interviews. The contributors are established and prize-winning authors, as well as emerging writers. Click here to read a guest post by project coordinator Licia Canton on the origins of this fascinating project.

To learn more about Elia funding opportunities and to see if may be eligible, click here.

The 2020-2021 funding season saw several wonderful projects receive funding from the Elia Chair. Read more about their work on Italian-Canadian studies by clicking below:

The Mariano A. Elia Graduate Scholarship (given this year in honour of previous Chairholder Gabriele Scardellato) was awarded to York PhD Candidate Anda Neagu. Ms. Neagu’s research on Italian dialectology focuses on syntactic structures of one Italian dialect and its consequences on how Italian communities from different regions approached language acquisition in Canada. Ms. Neagu’s work not only preserves the linguistic richness of the peninsula, but it also helps readers better understand the diversity of the Italian-Canadian linguistic experience. Read more about the project directly from Anda Neagu here.

The Mariano A. Elia Research Fund was awarded to Faculty of Education Professor Gabrielle Moser in support of her research project entitled “Transmitting Italian Feminisms.” Together with a team of researchers, Dr. Moser explores the roots of one Italian feminist school, how it was used to bring feminist ideas to working-class women in the 1970s and 1980s, and how the women who were involved in this movement, now living in Canada, transmit those ideas to younger Canadian generations. Read more about the project directly from Dr. Gabrielle Moser here.

Our congratulations to the recipients!

To learn more about Elia funding opportunities and to see if you are eligible, click here. 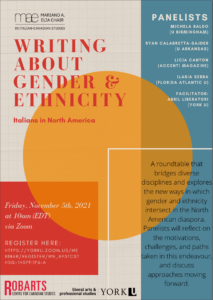 On Friday November 5th, 2021, the Elia Chair ran the roundtable discussion "Writing About Gender & Ethnicity: Italians in North America. The roundtable included panelists Michela Baldo (U Birmingham), Licia Canton (Accenti Magazine, AICW), Ryan Calabretta-Sajder (U Arkansas), and Ilaria Serra (Florida Atlantic U), and facilitated by Elia Chairholder Abril Liberatori. The interdisciplinary discussion engaged scholars who are exploring new ways in which gender and ethnicity intersect, and reflected on what kinds of questions we want to ask today (and moving forward) as writers and scholars of both gender and ethnicity. Panelists reflected on their motivations, challenges and their approaches moving forward. 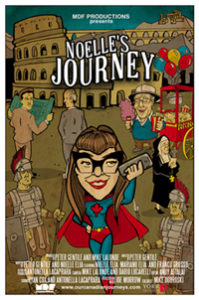 The film follows Noelle Elia on her voyage to discover the worlds of her grandfather, Mariano Elia, and that of her good friend, Franco Grosso.

Lawrence Grassi: From Piedmont to the Rocky Mountains

“Lawrence Grassi has long been an enigmatic and poorly understood character in the story of the Canadian Rocky Mountains. Coal miner, mountain climber, guide, and trail builder, Lawrence’s roots have been shrouded in mystery and his exploits the stuff of legend. Who he really was and what he really did has been the subject of speculation for decades. In this book, Elio Costa and Gabriele Scardellato have pulled the curtain back on this mythic figure, revealing a man who is even more complex and enigmatic than previously imagined. Meticulously researched, this book is a wonderful new contribution to the fascinating history of the Bow Valley and a tribute to the millions of pioneers who ventured across the oceans to find their fortune in a harsh and distant land.” Chic Scott, author of Pushing the Limits: The Story of Canadian Mountaineering Read More

A highly acclaimed documentary film on the experience of Italian-Canadians during World War II. The film was produced by Aysha Productions Inc. in collaboration with The Mariano A. Elia Chair in Italian-Canadian Studies, York University with a grant from Citizenship and Immigration Canada’s CHR Program. It was premiered in Toronto in April 2012 at the Royal Ontario Museum.

In 2012 Still Ocean Films produced the award winning documentary film titled Saturnia, the name of a ship that carried more than 260,000 Italian immigrants, troops, and others to North America. The story of Italian emigration to Canada in post-WW II period is narrated through the distant memories and vivid recollections of the experiences of passengers who travelled on this ship. The film was written, directed and produced by Ferdinando Dell’Omo and Lilia Topouzova  with The Mariano A. Elia Chair in Italian-Canadian Studies, York University, which provided the producers with an initial research grant.

An award-winning collection of articles on Toronto’s most important post-Word War II Italian immigrant settlement which features a history of the neighbourhood, titled “College Street Little Italy: More than a Century of Toronto Italia” (pp. 79-106), by Professor Gabriele Scardellato. 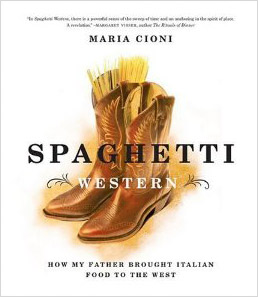 Spaghetti Western: How My Father Brought Italian Food to the West

Spaghetti Western is the story of Genesio (Gene) Cioni, his family, community and the food that made him famous during the fabulous fifties when he introduced the West to Italian cooking. Read More

Not Paved with Gold:
Italian-Canadian Immigrants in the 1970s

These stunning photographs document the lives of Italian immigrants in Toronto. Award-winning photographer and cultural historian Vincenzo Pietropaolo has spent much of his life photographing inside the Italian-Canadian community. While the images in this book show the fabric of Italian-Canadian life in Toronto, they evoke the lives of immigrants in cities around the world. With a foreword by novelist Nino Ricci, and context provided by the photographer, Not Paved with Gold pays tribute to the immigrant experience. Read More

The Lucky Immigrant: The Public Life of Fortunato Rao

“This book grew out of several enjoyable afternoons … during which Fortunato Rao and the editors discussed the experience of immigrant workers in Canada. The Mariano A. Elia Chair in Italian-Canadian Studies at York University, which has done so much to encourage research activities and publications in the field of Italian-Canadian studies, helped nurture and develop this book by supplying generous funding. …” [from the editors’ “Acknowledgements,” p. 7]

Enemies Within: Italian and Other Internees in Canada and Abroad

“Since current debates on internment generate much emotion but are often woefully uninformed by history, a study of this topic is both timely and valuable. … As historians … we watched with concern the campaign of the Italian Canadian Redress Committee. In our view, its leaders were guided by a simplified version of events. … drawing on selective evidence, ignoring contrary views, and glossing over the fascist history of the Italian immigrant communities — has become the orthodox position. Efforts to revise it [including the current study] have provoked anger or silence.” [from the editors’ “Introduction”]